Last Saturday morning, the clinic escorts of L.A. for Choice arrived early at the clinic we support to prepare for the Survivors of the Abortion Holocaust’s annual campaign of heightened and targeted harassment, which they promote as the “Christmas Caroling Project.” L.A. for Choice organizers actively monitor local anti-choice websites, so we knew that this anti-choice group, which has a history of promoting aggressive and illegal intimidation tactics, would be joining the regular group of anti-choice protesters the women at our clinic face every week.

In past years the Survivors of the Abortion Holocaust’s caroling event has meant trespassing on private property, filling clinics with dozens of protesters, screaming at and surrounding patients, and physically blocking patients from accessing services, all while singing Christmas carols. They leave only when the police arrive ready to arrest them.

This year the clinic escorts of L.A. for Choice were expecting them. Having been warned about this group’s aggression and disregard for the law, several LAPD officers arrived to check in with us and the clinic, and they stayed on-site or nearby all morning.

Soon after the clinic escorts and police gathered, it became clear that the Survivors of Abortion Holocaust were assembling at a Catholic church across the street. The group sent advance teams to assess the clinic’s vulnerability. Our experienced clinic escorts, in place and alert, identified these teams easily despite the protesters attempts to give the appearance of “non-threatening” nonchalance. 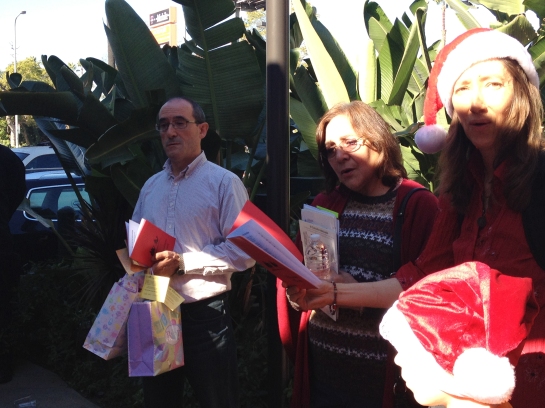 The man in this photo posed as a restaurant patron while he slyly scoped out the clinic.

The Survivors of the Abortion Holocaust then left the church in a line of white passenger vans to begin their campaign of harassment at other area clinics, which unfortunately do not have clinic escort support.

Survivors of the Abortion Holocaust is just one of the groups targeting this clinic, so while they went off to invade a different clinic (tweeting about their illegal activities all the while), L.A. for Choice clinic escorts stayed on-site to protect women from the regular group of anti-choice provocateurs that flank the sidewalks of the clinic and distribute bloody fetus pictures to passersby.

Some protesters avoid direct confrontation and instead pray for clinic escorts' souls. Thanks, guys!

Our regular protesters employ a variety of intimidation tactics, including the exploitation of their own children.

Around 12:30 p.m., as anticipated, the Survivors of the Abortion Holocaust returned. The large group of anti-choice protesters—led by group organizers Jeff White and Cheryl Conrad but made up of mostly young people and children—walked over the property line (their legal boundary) and toward the clinic, congregating in the alcove in front of the building. The clinic staff locked their doors and our clinic escorts lined up along the doors, between the protesters and the clinic. 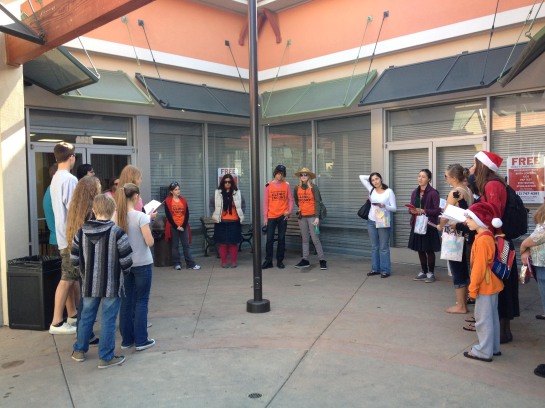 Then they sang. While they sang, Jeff White—group organizer and repeat offender of trespassing, harassment, and vigilantism, for which he has served multiple jail terms—videotaped clinic escorts and was visibly aggravated after being questioned by police. The group’s other organizer, Cheryl Conrad, was reluctant to give the group’s full name to the officer who asked her for it, calling it only “The Survivors,” until a nearby clinic escort prompted her to speak the rest of the name aloud. 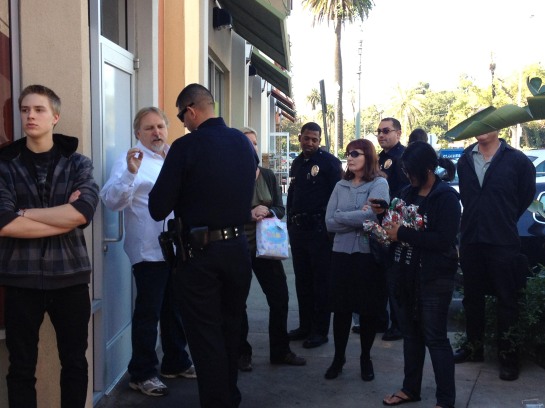 Jeff White and Cheryl Conrad talk to police while other protesters look on.

The hostile group bearing down on the clinic with their joyless singing and gift bags that read “Baby!” was disturbing, but their real malice presented itself when a patient and her companion walked toward the clinic entrance. Their song abruptly abandoned, the “carolers” broke ranks and rushed the patient en masse, many of them screaming but most focused on physically obstructing her from any movement. Clinic escorts blocked this terrifying display of intimidation by promptly surrounding the patient and walking with her to the doors, which the clinic staff quickly unlocked to allow her and her companion inside.

The Survivors of the Abortion Holocaust’s carolers retreated and returned to their song with glares and an even more menacing attitude. Then one of the carolers approached a clinic escort with the gift bags intended for the clinic staff, and said, “Don’t worry; it’s not a bomb.” The caroler stopped urging the clinic escort to take the bags only after she requested several times that the caroler leave her alone, disregard of which is grounds for arrest for harassment. 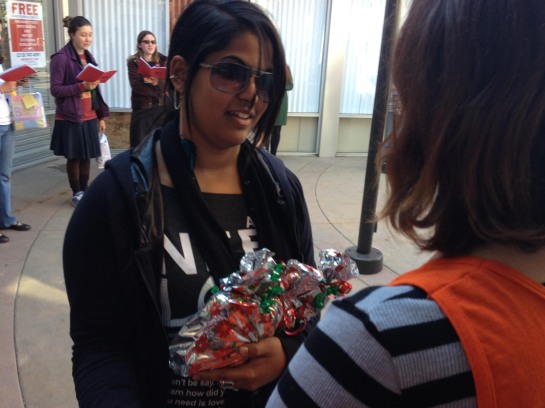 This caroler claims her "gifts" are not bombs. That's creepy and in poor taste, caroler.

Then the protesters departed.

Local, state and federal law protects freedom of access to clinic entrances, but enforcement is generally left up to the discretion of each officer. The police, who had observed the situation but did not intervene, watched them go. We look forward to continuing our dialogue with LAPD about the importance of their presence as well as enforcement of laws that protect women from harassment.

We celebrated with a victory brunch. It is hard to feel victorious after bearing witness to protesters’ intimidation of patients and harassment of clinic workers and clinic escorts, but we know if we hadn’t been there to protect the clinic and its patients, it would have been far worse. Ultimately, we did everything we could to ensure that patients had safe, peaceful access to reproductive health care. That’s our mission, and we succeeded. Brunch was well-deserved and much enjoyed.

We hope you’ll consider joining us at L.A. for Choice. Email [email protected] for information about how you can help protect the women in your community. Happy Christmahanakwanzika, and be safe out there.

About L.A. for Choice

This website is a space where the voices of escorts, clients, clinic workers and other pro-choice Angelenos can be heard. To find out more about volunteering as a clinic escort in Los Angeles, please email [email protected]. Thanks!

The first time you comment, your comment will be moderated. Civil discussion is welcome, but hateful or threatening speech will not be tolerated. No one on this site has to account to you for their beliefs or choices, and all trolls will be promptly sent back underneath their bridges.