Well we’re right in the middle of 40 Days for Life’s annual intimidation campaign and so far, so good. Well, it’s been “good” if you count the fact that we’ve seen a steady increase in clinic escort support (thank you all!), while a fewer number of protesters than expected nevertheless harass our clinic by exploiting their own children with funny signs like “I vote prolife”; using bullhorns to shout at passersby (a tactic we’re pretty sure is illegal); and cheering when people honk at their “Honk if you love Jesus” sign, as if with every honk they have claimed some victory. But who wouldn’t honk for Jesus? I would honk for Jesus. I would also honk for people to get OUT OF THE ROAD I AM DRIVING IN, so it’s entirely possible, likely even, that 50 to 100 percent of those honks were directly related to errant protesters ignoring basic traffic rules and disturbing the peace by stepping in front of oncoming traffic to shove their grotesque homemade social studies project boards onto unsuspecting nice old ladies out for their Saturday drive. FOR SHAME.

While all this fanfare was happening amongst the eight or 10 protesters (never doubt that a few people can make a lot of noise), our 17 clinic escorts quietly lined the sidewalk near our clinic, occasionally ushering a patient past the protesters or helping patients or pedestrians understand they are not obligated to engage with the hatemongers, but mostly, we stood by, observed and didn’t draw a lot of attention to ourselves.

Which brings me to this week’s blog topic: The difference between protesting or demonstrating and being a clinic escort. Last week a young fella walked through what has come to be known as “the gauntlet” at our clinic, just looking, reading signs, being a generally curious young fella. He engaged the anti-choice protesters for several minutes in what looked like a healthy exchange of ideas before moving on. This happens occasionally. We are more or less in favor of this if A) the generally curious young person is clearly not a patient seeking health services at our clinic, and B) if this healthy exchange of ideas takes up several minutes of valuable harassment time of say, three to four protesters at once. However, this time, this generally curious young fella moved from the protesters to our clinic escorts to begin his targeted “What’s your position?” questioning. We are more or less not in favor of this if it A) distracts our attention in any way from our role as clinic escorts, which is our sole reason for being there, or B) no, that’s it, just A. (We encourage generally curious young people to stay curious, though. And if you are generally curious about becoming a clinic escort, we will begin offering trainings soon and you can ask all the questions you want and WE WILL ANSWER THEM.)

At L.A. for Choice, our role as clinic escorts is pretty simple. We are there to accompany clients who need to pass by protesters to reach the clinic and make sure their access is not hindered. We are not there to counter-protest, carry signs or engage in debate. To keep these boundaries clear and to make our efforts effective for the women we support, we clearly identify ourselves as clinic escorts; we coordinate with clinic management, property owners and local law enforcement to ensure property boundaries, parking and trespass laws are understood and enforced; and we do it all with a good attitude, because which would you rather look at when you’re walking the angry gauntlet of anti-choice ne’er-do-wells? 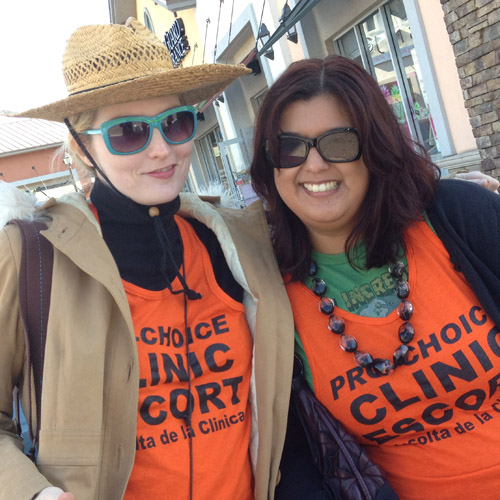 Lastly, women’s health news continues to dominate headlines–from the all-male House panel on birth control, to Rush Limbaugh using vile language and rhetoric against a women’s health advocate, to one of Rick Santorum’s advisors suggesting that women just put aspirin between their knees–making it almost impossible to narrow down which news is the most egregious/pertinent/important/cannot miss, but we’ll try:

Happy International Women’s Day tomorrow, March 8, and National Day of Appreciation for Abortion Providers on Saturday, March 10! And as always, be safe out there.

About L.A. for Choice

This website is a space where the voices of escorts, clients, clinic workers and other pro-choice Angelenos can be heard. To find out more about volunteering as a clinic escort in Los Angeles, please email [email protected]. Thanks!

The first time you comment, your comment will be moderated. Civil discussion is welcome, but hateful or threatening speech will not be tolerated. No one on this site has to account to you for their beliefs or choices, and all trolls will be promptly sent back underneath their bridges.